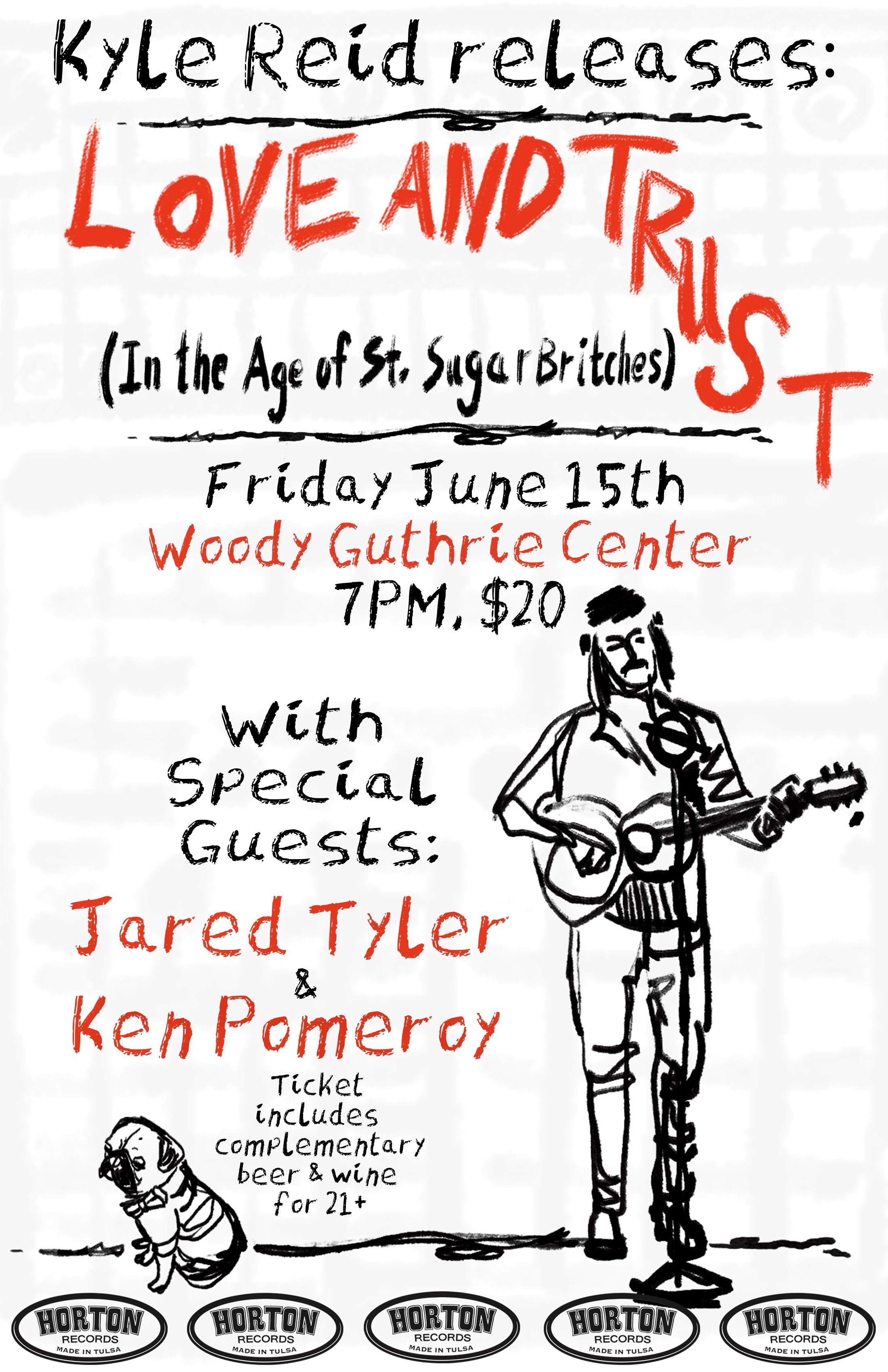 Get your tickets HERE

With the holidays in the rear view mirror I'm looking forward to the new year and the release of my new album, "Love & Trust." Over the past few weeks I've been working with Adam Taylor at Creaky Floor Studio on the final mixes of my album and wow! I'm beyond excited for you all to hear these songs. Giving the thumbs-up to the final mixes of my songs has lit a fire in me, and so I'm kicking my Kickstarter into high gear with new rewards as we go into the final days of the campaign.

I've added 3 special edition cigar box guitars that I'm building for a music video. These guitars will come in a cool display case and feature special electronics and aesthetic appointments.

I've also added my first main cigar box guitar, built by me in 2012, as a reward. It was with is the very guitar that I recorded my 2015 EP, "Don't Be Afraid..." and played many shows from about 2012-2016. This guitar shows all the years of use and travel and will come in a cool display case as well.

You can now own one of the session tapes from the new album for contributing to my Kickstarter campaign. These are the cassette tapes I used to record all of my raw performances during my time in New Orleans. Each one will be framed with a copy of the new album.

Another cool reward I just added is a 1 on 1, one hour guitar lesson with me. Lets play guitar, discuss theory and technique, and learn something from each other.

I have already had several songwriters take me up on my producer packages but I have room for more! Bring your songs into my studio and lets make an EP or an Album. I'll lend all of my musical powers to help your songs sound great. Feel free to message me if you have questions about my recording philosophy and process.

Thank you again to everyone who has already contributed to the album! W'e're going to do really cool stuff together.

Watch for more updates as the campaign wraps up! 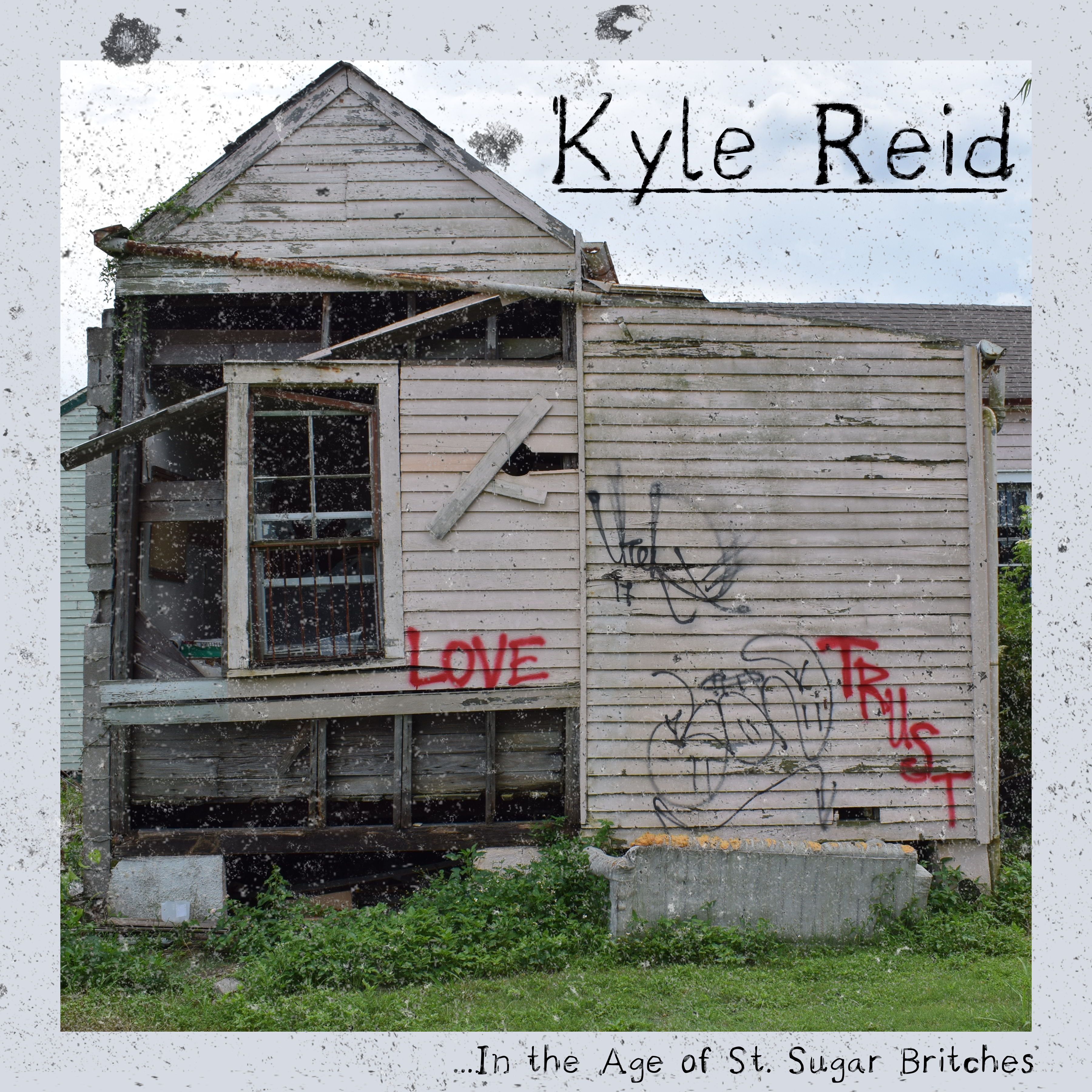 I'm very excited to announce that I've recorded a new album of original material title, "Love & Trust (In the Age of St. Sugar Britches)." This album was recorded in a 1 bedroom apartment in New Orleans, LA over the summer of 2017. I played all the instruments on the album (except Kevin Stringfellow's tasteful trumpet part on "Dancing Alone") utilizing my guitars, a banjo, a piano, synthesizers, and a drum machine!. It all came together in an exciting sound that I can't wait to share with the world!

I've launched a Kickstarter campaign to help me finish the process of mixing/mastering and printing copies of my new album. Please take a moment to check out the campaign. Watch the video and check out some of the cool rewards I'm offering for contributors (Like the package where I produce your next EP or album on my 4 track recorder, the way I made this album!).

New Residency! Back in Norman, OK 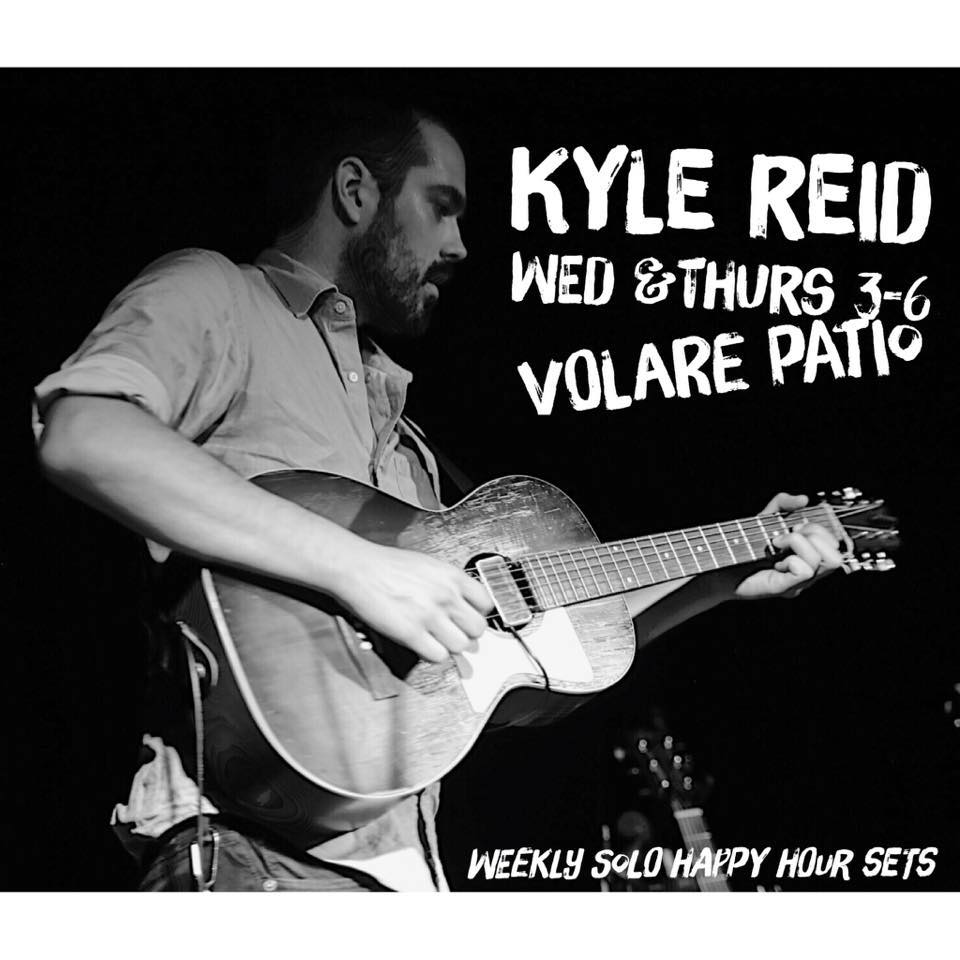 Howdy everyone! Well, some of y'all might have heard by now and some of you might have seen me around town but I'd like to officially announce that I have moved back to Norman, Oklahoma! After a year living and loving in Kansas City, and a Summer recording my next album in New Orleans, I have returned to my musical home to continue writing, recording, collaborating and performing with my Okie musical brethren. I make this move with the support of my amazing and loving girlfriend Galadriel who lifts me up and daily helps me find the strength and courage to continue to be a creative force in this world.

I've added new dates to my calendar so check out those shows. And keep your eyes and ears peeled for songs from my new album that will be released in the not-so-distant future.

In the meantime, come enjoy the beautiful weather out on the Volare patio with me today, tomorrow, and every Wednesday/Thursday from 3-6 in September.

Check out the Cigar Box page and my online store for a new batch of cigar box guitars for sale! 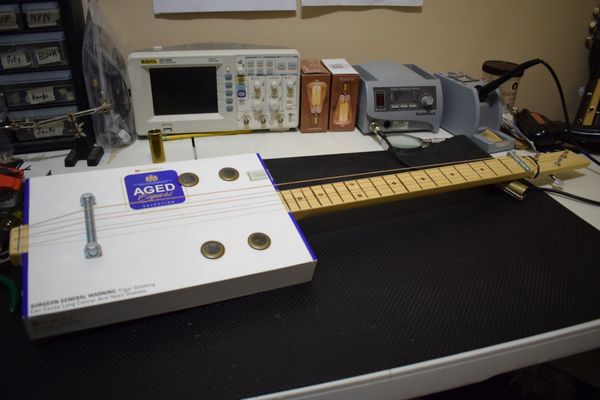 Howdy Friends! Check out the new Tin Can Gramophone page on the site! This will be the home for news, information, schedules etc. for my weekly residency at the world famous Blue Door. Sign up for the weekly songwriting prompt and come see me and some of the greatest songwriters around swap songs and stories each Wednesday night. Lets build up a community of songwriters and song-appreciaters y'all!

Hi Friends! I've just finished up a batch of 20 cigar box guitars. Details on how to get one for yourself can be found on the cigar box page of the website here. 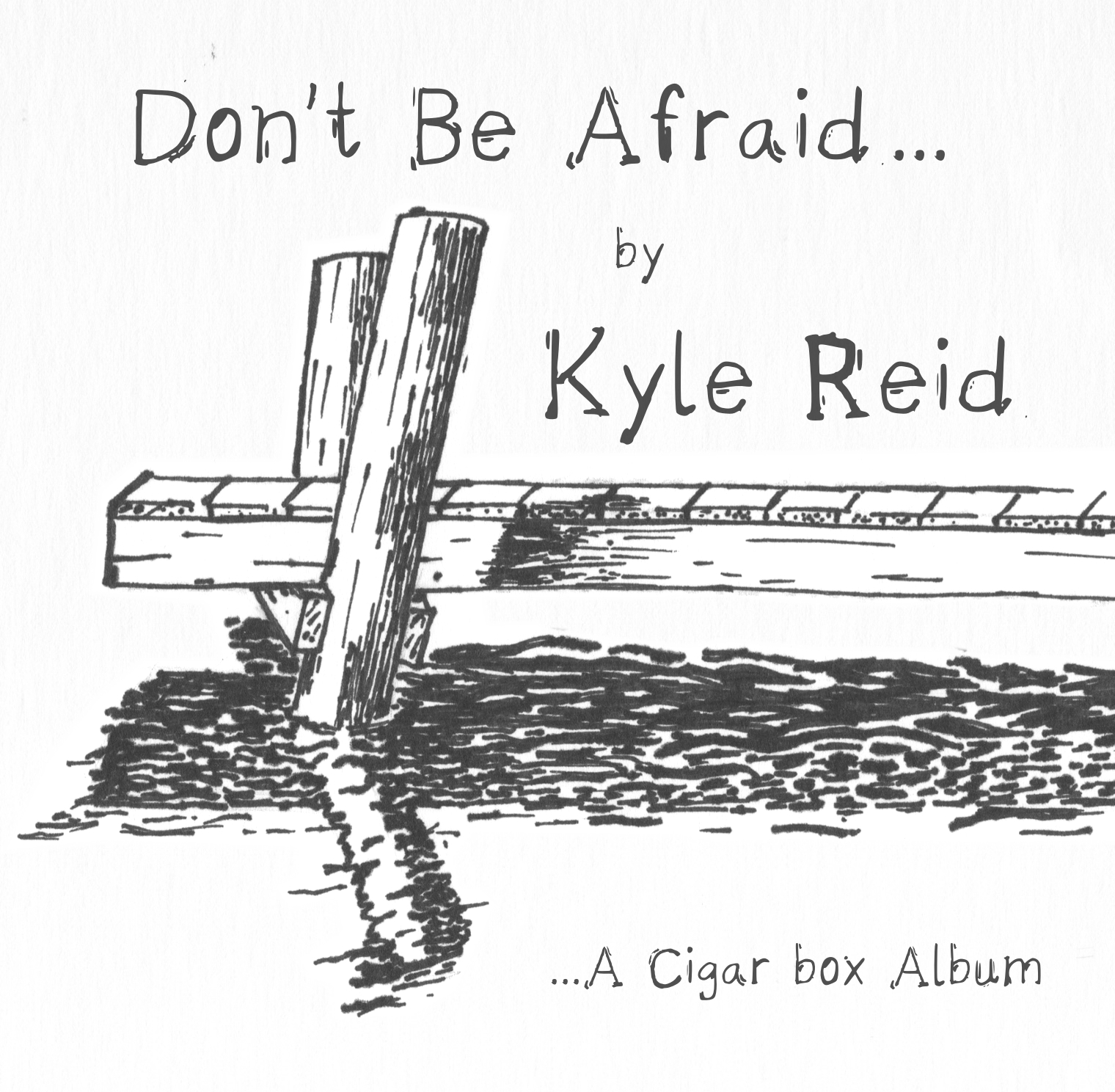 This EP was recorded in 4 days in a blue house on a bluff overlooking a lake in Arkansas in the Spring of 2014. All of the songs on this EP were written and performed by me on a three-stringed cigar box guitar I built in the Spring of 2011. It was a joy to record these songs and I'm excited to share them with you.

I'll be releasing the EP with the help of the Paramount Theater in Oklahoma City on May 8th. Get your tickets here and rsvp to the Facebook event here. Thank you all so much for your support! 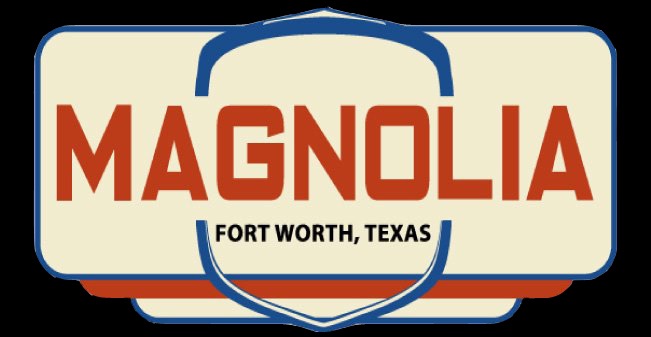 The guys and I are piled in the van headed down to Fort Worth for an evening of music at the Magnolia Motor Lounge with Foolish Philosophy label mate John Calvin Abney. I fully intend to mess with Texas. Let's roll boys and girls! 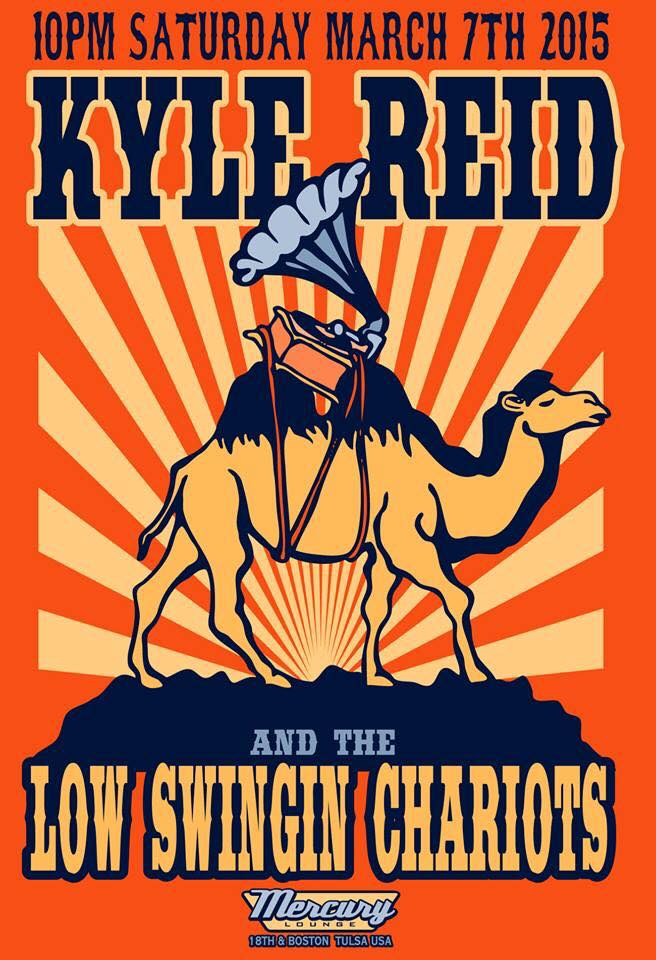 Hey everybody! Vinyl copies of the Chariots' album, "Alright, Here We Go..." Are now available! You can get a copy at our upcoming Tulsa release show at the Mercury Lounge on March 7th! You can also get a vinyl copy from my new online store where I also have new t-shirts and CDs/ digital downloads. Check it out! I can't wait for you to hear this album on 180g vinyl!